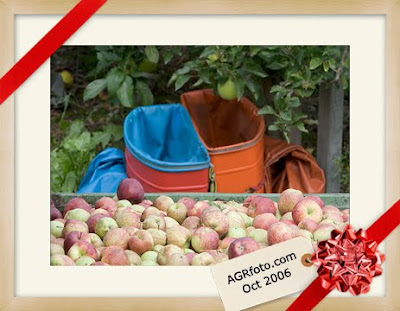 Do you like apples? Where do yours come from? Are they local or are they from another part of Europe or even further afield? Have a look at the labels next time you go shopping and see if you can find "Val Venosta","Vinschgau", "Sudtirol" or "Alto Adige".

I read recently that the apple industry of this region believe that the United Kingdom is the best market for their products because they pay the best prices and on time. Now, what this means is that the buyers for the UK supermarket are setting prices also for the consumer. One might think that the prices ought to be lower if other European buyers are paying less then the UK could also be buying at those lower prices. Why ship produce from so far away anyway, aren't there perfectly good apples in the UK?

I've noticed that even here in the biggest apple growing region in Europe, that some supermarkets/shops even though they are surrounded by hectares of apple trees, sell apples from Chile! How banal is that?

It seems that the buyers are setting the standards of what the growers should be producing, and some governments are busily handing out grants to farmers to destroy trees because of a "mountain" of them. Although certainly not here.

We've been in Val Venosta for the past seven years or so, and no matter where we live we are surrounded by apple orchards and all the activity which goes with it, from planting seedlings to cutting them down after several years, from spraying them with water to form ice on the flowers in frosty spring times, and pesticides in the summer, to the traffic jamming harvest time. 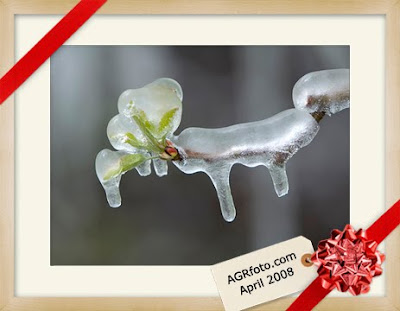 I complain a lot about all of this mono-culture even though I find it rather photogenic at times. 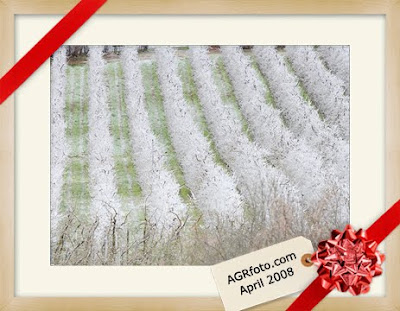 The word orchard lends itself to something a bit more romantic than the reality, when really they are intensively grown crops in massive areas which produce more fruit from small gm developed trees. 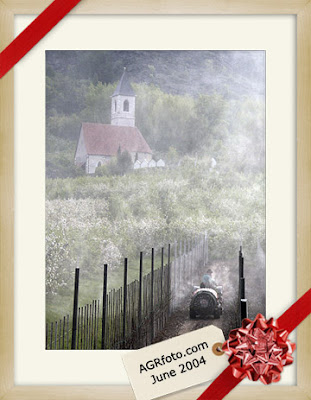 Grown half a metre apart in rows sometimes 100s of metres long, regularly and vigorously sprayed with pesticides from small tractors fitting neatly down each isle. 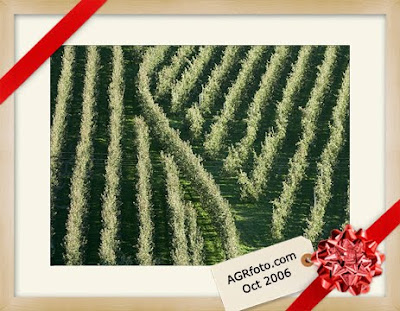 They are watered from overhead stand pipes, each field or owner's crop taking it in turns to receive an 8 hour session of continuous drenching. Often I have seen this stretch to 12 hours. If you've ever visited this region out of the winter season you may have noticed a lot of water on the roads and footpaths when the skies are clear blue. This is because the irrigation is not that accurate and overshoots the trees, this is made worse if the wind is strong. Also, the terrain is often steep and after just a couple of hours the ground is so saturated that the majority of water, is just running off. On hot days there is a lot of evaporation too as it is dispersed by a grating which the water jets hit creating finer mist. On days when it rains, even heavily for hours or days, they still take their turn throwing the water away. 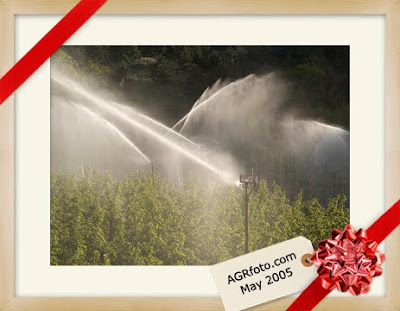 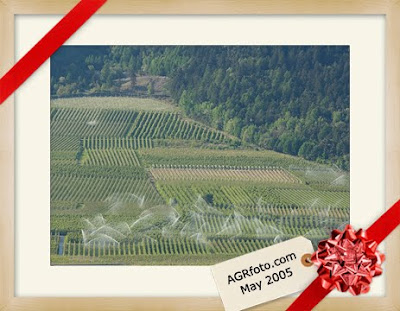 They are obsessed. The apple has indeed become the "golden egg" and everything else here seems pale in significance. Everything is their right, we cannot use the small lanes that meander through the trees for these are for tractors and cyclists only, which is only right and proper. 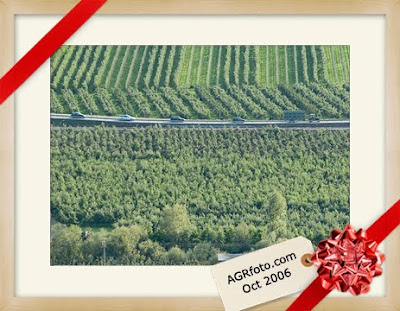 However, it is also easier for the tractors to cover the distances on the main roads rarely thinking to pull over allowing the tail back of traffic to pass, so they don't use "their" roads until the last moment. 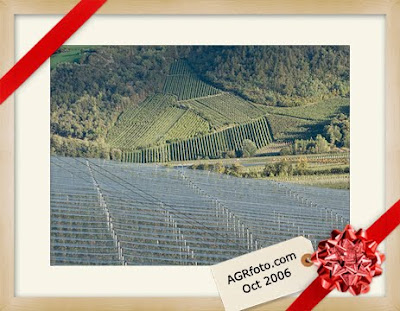 Supermarkets everywhere are demanding bigger and perfectly round fruit which will stay like that for a long time. It doesn't matter that they have bland taste compared to those small, wild, gnarly varieties that used to grow in your grandmother's garden. As long as we keep buying into this, it will continue.

They call themselves farmers, but the real farmers in the region are those living and working on the slopes surrounding their property in the higher alpine altitudes and often isolated areas. 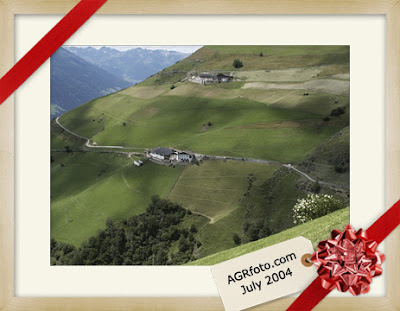 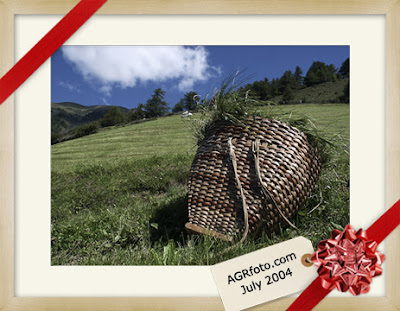 Those in the valley buy land wherever they find it for sale (at a premium) even if it is nowhere near their (farm)house, they plant yet more trees. Compared to dairy farming on the slopes above, they have it easy. In fact in the mid-winter and mid-summer months they do so little that they take part time jobs in the tourist trade. They all seem to have 2 or 3 cars but prefer driving around on their tractors, or so it seems. Probably because they have tax-free fuel. They also do not pay taxes like the rest of us because they depend upon a law that as farmers working above a certain altitude they are exempt. It is the only place I have been where the farmers have Mercedes and are building luxury second homes on part of their land. By connecting them somehow to the original property they avoid more tax. 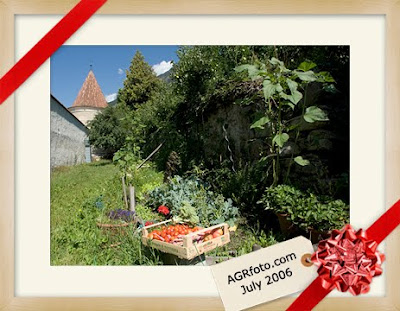 We have a small veg plot behind us and until we insisted they stop, it was regularly sprayed with insecticides/pesticides because the trees are at the limit of their boundary with us, two meters above behind the retaining wall. They now cover our plot with plastic sheeting each time, but insist it isn't poisonous anyway. Why does he wear an industrial mask while he does it then?

One of the trees fell last year, bringing down part of the historic wall with it and landing squarely on some tomato plants, blackcurrant bushes and the composting bin. It was there for two weeks before he removed it and the left the devastation behind for me to clear away. "No harm done" when confronted, "the bush?" was my wife's response. "I"ll get you a replacement", he laughs. We're still waiting.

It has been a good season for the apples this year, lots of sun, plenty of water, no real heavy frosts in the spring. Lots of golden globes hanging heavy on the small trees. Lots of cyclists helping themselves to them as they pass through the valley.

Lots of work for the pickers from Poland and Slovakia as well as locals. The apple grower families often take their holidays from normal work during this time to help pick, this saves also on paying migrant workers. 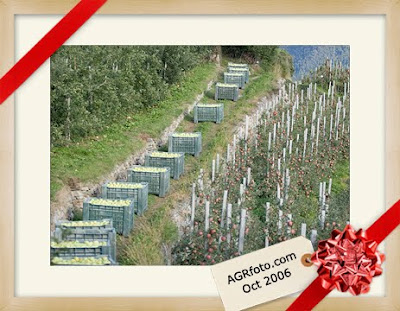 Which reminds me, time to go scrumping, before they're all gone.
Posted by Alex Rowbotham at 16:05

Alex Rowbotham
I am a British photographer and media designer presently based in Italy. I am also the creative director of the Cultural Association Luce Dipinta Multivisioni who present projection events and the Painting with Light festivals.

WEB BLOGS and OTHER LINKS